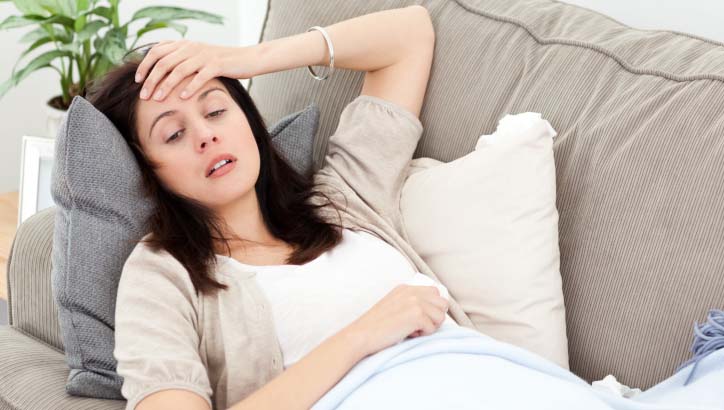 In the early months during pregnancy, you might feel sick and tired in mornings which can also show symptoms such as nausea, vomiting etc. These symptoms mostly occur mostly in the early mornings and might also occur during night time as well. These initial symptoms can resolve by 12-15 weeks of pregnancy and the cause of morning sickness is due to the change in hormones during this period. However, these symptoms can be reduced when you start eating small meals frequently rather than having a large meal, and you need to drink lots of fluids, avoid foods that are rich in fat content and also stop consuming caffeine and have ample rest. Some other treatments which can be included are intake of vitamins B12 and B6, antihistamines, acupressure and few herbal remedies which are yet to be described below.

Underground stem of ginger known as Zingiber officinalis can be used to cure morning sickness. It is abundant in volatile oils and phenol compounds. Take around 250mg of this herb four times a day. It might show some side effects such as diarrhea, heartburn and discomfort in stomach etc. However, you should not consume ginger when you are already taking aspirin or blood thinners.

Lavandula officinalis or lavender is one effective herb which can help treat morning sickness. Lavender essential oil is used for several medicinal purposes. You can intake around 20 drops of this tincture twice a day or a cup of this infusion twice a day. It might show up some side effects such as constipation, headache and increased appetite. You should not consume it 2 weeks before a surgery as it causes sedations and there might be increase in the effect of anesthesia during surgery.

Peppermint leaves or mentha piperita leaves have several medicinal properties. Its extract contains volatile menthol oil. You can consume a cup of this infusion twice a day or as a capsule (1-2 enteric capsules) i.e. 0.2ml of menthol. It might show side effects such as headache, heartburn, sores in mouth, allergic reactions etc.

The herbal tea prepared from leaves of Melissa officinalis can help reduce anxiety and stress and also helps relieve few symptoms of morning sickness during pregnancy. You can consume around three or four cups of this herbal tea a day.

Seeds of fennel or Foeniculum vulgare can be used to prepare herbal tea. They are known for anesthetic properties and help lower the feeling of nausea as well as queasiness in stomach. Consume a cup of this herbal tea twice a day. You may also consume 1-2 spoons of this tincture alternatively. This remedy might show symptoms such as sensitivity to sunlight.

How to Get Rid of Cellulite

Melissa Mellie Aug 14, 2015 1
After pounding the pavements, holding poses, pedalling for hours, and lunging to the core, it's time to refuel.…

How Administrators and Psychiatric Nurses Can Help Increase Their…

Acne Products for Sensitive Skin: The Solution is here

Physiotherapy and Its Benefits for Health

3 Easy Ways to Get Rid of Your Unused Medication

How Much Water Should You Drink Every Day for Clear Skin