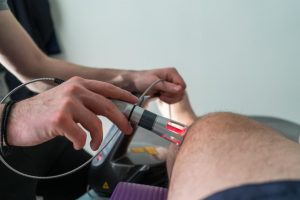 Endovenous laser varicose vein treatment is also called endovenous laser treatment, or if your prefer to use the shorthand, EVLT or ELT. And yes… EVLT is one of the most effective types of varicose vein treatment available. It is also considered a safe procedure, so much so it is most often performed in a clinic, not a hospital, with only local anaesthesia, and the patient goes home the very same day of the procedure. Further, instead of bed rest, the patient is actually encouraged to walk as much as possible.

In 2007, a team of doctors from The Netherlands performed a systematic review of all the available scientific literature on the efficacy and safety of EVLT. Only reports which included at least a three month follow-up were included in the analysis because this is the only way to know for sure how effective the treatment was and if there were any problems. The paper was published in the European Journal of Vascular and Endovascular Surgery in 2008.

Please note that the term “efficacy” is just a fancy word for how successful and how effective the procedure was based on the criteria established by the doctor performing the varicose vein treatment. The goal of the ELVT procedure is to ablate the problem vein using a precise band of laser energy delivered to the precise location of the vein causing pooling of blood and venous reflux.

Ablation with laser energy collapses the problem vein so it is totally occluded from receiving any more blood. This prevents any further pooling of blood due to this problem vein. If duplex ultrasound shows this to be the case on a follow up after the procedure, especially after three months, the “efficacy: is considered to be very good.

The focus of the 2007 study was intended to inform vein doctors working in varicose vein treatment centers how effective and safe this varicose vein procedure is using a broad spectrum of objective data reported from many clinics and countries. This would advise them in a more rigorous way than the more subjective “feel” a clinical doctor has in his or her own practice. The results are also useful to anyone who is considering this type of varicose vein treatment.

It is important to note that while this was a tremendously helpful paper, the scope was somewhat limited by the fact that EVLT has only been used for a relatively short amount of time, compared to other types of varicose vein treatment. The first study included in the analysis was published in 2003. Nonetheless, more than one hundred treated limbs were included in the scientific review which provides a large enough set of data points to perform a statistically significant analysis that is still relevant in 2018.

The doctors in this study also compared the results of EVLT to that of vein stripping of the greater saphenous vein and lessor saphenous vein. They noted that vein stripping is a much more invasive procedure, requires general anaesthesia, significantly lowers the quality of life, and recurrence rate of varicosity is quite high, more than one-third of the time five years after the surgery.

The effectiveness of EVLT was considered then and still is about ninety percent overall. This is a very high success rate. Further, there are generally no serious long term consequences when the procedure fails, or partially fails, for some reason, In most cases, this just means a feeder vein was missed and an additionally procedure will need to be performed to correct the entire scope of the problem. The doctors who conducted the study did recommend that a larger scale randomized clinical trial be performed on EVLT with built in comparisons to other modern varicose vein treatment such as ultrasound-guided foam sclerotherapy (UGFS).

Thus, given the efficacy of the spectrum of ELVT procedures included in this study, it is safe to say that EVLT is a highly effective and safe clinical varicose vein treatment. This is especially true if you compare it to the older method of vein stripping that is now being phased out. It is also important to mention that ELVT is often used in deeper veins or deeper portions of veins, than those where sclerotherapy may be the recommended varicose vein treatment.

A drug that enhances your mood

4 Signs of Traumatic Brain Injury and What to Do Next

Anica Oaks Mar 2, 2016 0
All head injuries should be taken seriously, but traumatic brain injuries are some of the most serious. There…

Natural remedies for clearing off dandruff

5 Ways Professionals Can Give Your Callers a Customized Experience

What to Do When Medical Malpractice Leads to a Preventable Amputation

5 Tips to Practicing Better Hygiene and Making it Habitual

Home Sweet Home: How to Happily Live Independently as a Senior